Since its establishment on 2006, PIF has taken the month of Ramadan as a special chance to gather people with various cultural background around a dinner table to “breaking bread together” and by doing so to contribute to New Zealand public’s greater understanding of cultural diversity.

The Iftar dinner was initiated by Dr. Ashraf Choudhary, Former MP & Chairman of PIF’s Advisory Board, and international guest speaker, Mr Orhan Cicek, Education Advisor and Former president of Australian Intercultural Society (AIS), explaining the background and the aim of organising such an event.

Mayor Len Brown delivered an impressive speech. He acknowledged the Maori Culture and ANZAC spirit, and emphasized the role of tolerance, embracement, and harmony in economic growth, without which prosperity of a city and a country cannot be created. He also acknowledged the role of organizations like PIF in promotion of peace and understanding, in sharing culture and serving the community, and in celebrating the diversity of culture, faith, and ethnicity in New Zealand. Mayor finalized his speech by singing a Maori song:

Whakaaria mai Show
Tōu rīpeka ki au your cross to me.
Tiaho mai Let it shine
Rā roto i te pō there in the darkness.
Hei kona au to there I
Titiro atu ai. will be looking.
Ora, mate, In life, in death,
Hei au koe noho ai let me rest in thee.

MP Kanwaljit Singh Bakshi on behalf of Minister of Ethnic Communities, MP Su’a William Sio, MP Tim Barnett, Brian Henry, PIF Advisory Board member, Rakish Naidoo, Inspector, National Strategic Ethnic Advisor, Jo Brookbanks, Programmer of Auckland War Memorial Museum, and Paul Wilton, President of Beth Shalom Jewish community delivered speeches. They shared stories around a theme of how to build a peaceful society and reflected a common collective consciousness which leads people to observe and respect the value of diversity and to develop awareness of peace building. They confirmed the importance of such events in promoting dialogue between cultures, faiths and in creating connectedness and increasing understanding between people from different communities. They encouraged PIF to continue its role in proving what communities can accomplish when they come together and strive for a shared goal.

This Iftar dinner was not merely a great opportunity for guests to experience Turkish culture and its cuisine. “It was a very special evening. The PIF is such a wonderful and worthwhile organisation and all involved so dedicated and inspirational. We thoroughly enjoyed the company of the others at our table and found the speeches interesting and again inspirational” said Paul Wilton.

This Iftar, as Pauline Cornwell, Principle of Papatoetoe Intermediate School, concluded: “was a harmonious, encouraging gathering where all the best words, love, forgiveness, embrace, give, were gifted to the communities who have been striving to integrate into New Zealand society, and guests are encouraged to take those words home and to apply in daily life to be amongst friends who carries differences yet work together for a better peaceful future.” 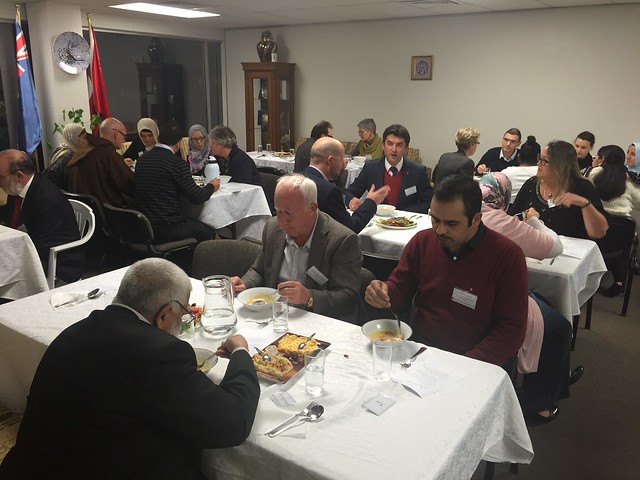