TALK: Altruists without Borders: The concept of Service in Contemporary Society

Pearl of the Islands Foundation had the pleasure in bringing Dr Jon Pahl, Professor at United Lutheran Seminary in Philadelphia, to New Zealand to speak on altruism and the Hizmet Movement.

Dr Pahl delivered a public talk at the St Columba Centre in Ponsonby speaking on ‘Altruists without Borders: The Concept of Service in Contemporary Society’ following the release of his latest book “Fethullah Gulen: A Life of Hizmet.” This book goes in-depth about Fethullah Gulen, a Turkish Muslim preacher, scholar, and author.

The evening began with a welcoming speech by PIF Advisory Board Member Naomi Johnson who welcomed and introduced the speakers before briefly mentioning the work PIF carries out in New Zealand.

Dr Chris Galloway, Senior Lecturer, was our facilitator on the night and introduced Dr Pahl’s topic before his talk. 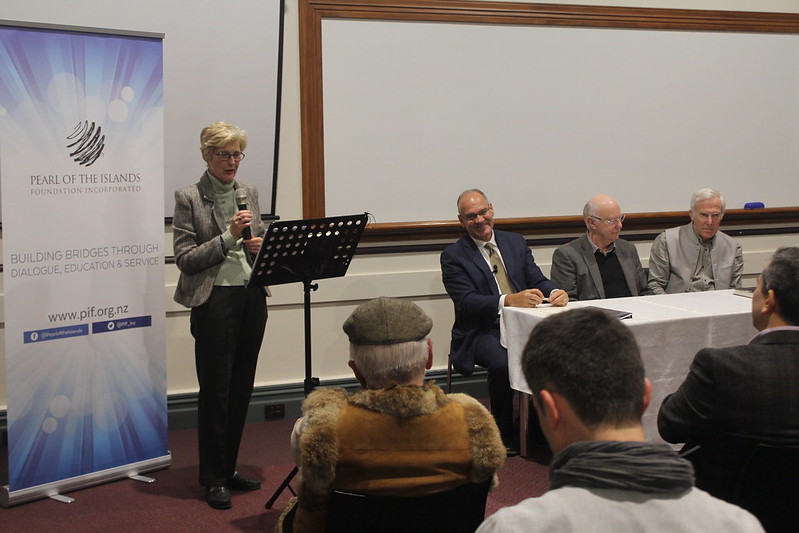 Professor Jon Pahl then took to the lectern to share his findings on the Hizmet Movement and altruism is embodied in this group. He suggested that Gulen inspired millions across the globe to dedicate their lives to service (hizmet in Turkish). Jon claimed that the movement was a progressive one which combines the elements of both science and faith.

“Fethullah Gulen has made the triple threat of poverty, ignorance, and disunity/violence the central nexus of problems he sought to resolve in his life”, said Jon. He further spoke of the work people inspired by Gulen were undertaking including the establishment of schools, funding intercultural and interfaith activities, and forging social enterprises to tackle the triple threat alluded to above.

The approach of the movement was one of ‘hosgoru.’ “However, ‘tolerance’ is not an accurate translation of the word”, said Dr Pahl. Hosgoru literally means to ‘see well.’

Jon also mentioned the setbacks the movement was facing. He acknowledged the obstacles and challenges but stated that people in the movement continue to push forward with their work and practice their ‘altruistic’ love which is a central tenet of Islam.

Following the talk, Professor Douglas Pratt responded to the talk. Douglas suggested that he could encapsulate the Hizmet Movement and altruism with 4 words, “these are authenticity and acceptance, compassion and capacity.”

Following the talks, questions came from the audience and answered by our speakers. Jon signed some books. The first critical biography of Gulen himself provides rare insights into the teachings of Gulen and those people he has influenced around the globe. Fethullah Gulen: A Life of Hizmet is available to purchase online.

You can watch the full event on Youtube below:

You can listen to his radio interview with Beate Matthies below:

Dr Jon Pahl is a historian of religions and Professor at United Lutheran Seminary in Philadelphia/Gettysburg.  He received his PhD from the University of Chicago Divinity School.  In addition to his recent biography, Fethullah Gülen–A Life of Hizmet:  Why A Muslim Scholar in Pennsylvania Matters to the World, Dr Pahl has authored or edited seven books, notably Shopping Malls and Other Sacred Spaces and Empire of Sacrifice: The Religious Origins of American Violence.   Jon has spoken with audiences around the globe, and he has worked as a progressive community activist with many agencies, most recently as a pastor at Union Congregational United Church of Christ in Green Bay, Wisconsin. Jon lives with his wife, Lisa, on a lake and woods where he enjoys gardening, relaxing with his extended family, and playing jazz as an avid amateur saxophonist.