TALK: Representations of Islam and Muslims in the New Zealand Media

Khairiah Rahman and Tayyaba Khan presented a talk on ‘Islam & Muslims in New Zealand Media’ in Newmarket on the 16th of October.

Khairiah, Senior Lecturer at the School of Communications AUT, presented her studies which were undertaken between 2014-2017 and Tayyaba, Founder of the Khadija Leadership Network, shared her experiences and thoughts on the topic.

The event began with Khairiah’s main talk. After going over some Muslim demographics, Khairiah looked at ‘othering’ taking place in the media. She suggests that this occurs because:

“We found that there was a significant trend of local stories typifying Islam and Muslims as violent people in New Zealand… Between 2014-2017 we found 5-7 more stories on Islam categorised as ‘Islamic terrorism’ and ‘Islamic Jihad’ compared to stories on ‘Islam’ alone.”

“Our analysis of the news stories showed that articles tended to be negative when the Muslim voice was absent or manipulated.”

Khairiah introduced the theory of Tak’weel which, in summary, refers to this idea that any meaning we create comes through our sensory perceptions. “So, knowledge and learning becomes a journey. Continually asking, doubting, and seeking.” She further added that we must continue to question and seek knowledge to challenge our own biases.

She gave some concrete examples of the negative exemplifications of Muslims in New Zealand before the Christchurch tragedy. For example, stereotypical images of men in robes reinforce and encourage a sense of fear.

The recommendations for people to stand against Islamophobia and prejudice include the following:

Tayyaba Khan responded to the talk with her own experience before opening the floor to questions. The 30 or so attentive audience put forward questions to both presenters.

Both Khairiah and Tayyaba were presented with gifts before the event came to a close. 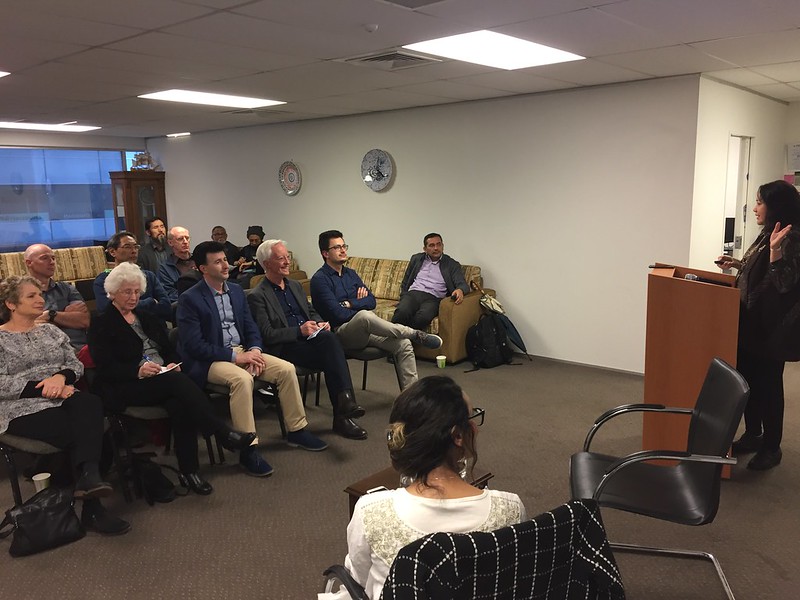 Khairiah A Rahman is Senior Lecturer at the School of Communication Studies, AUT University in Auckland, New Zealand where she lectures in intercultural communication and public relations. She is the Secretary for Media Education for the Asian Congress for Media and Communication. She is also on the advisory board of the Pacific Media Centre at AUT University and serves as their Associate Researcher and Assistant Editor of the Pacific Journalism Review Journal. Khairiah has written articles, book chapters and presented research on transnational identities, crisis miscommunication, intercultural trust relationships, media representations and the Islamic perspective of dialogue and persuasion. Her joint article on Intercultural communication study in New Zealand (2017) was published in The International Encyclopaedia of Intercultural Communication (John Wiley & Sons). Her joint research on Media representations of Islam and Muslims in New Zealand (2018) was cited in various media outlets including RNZ (Radio New Zealand), the spinoff.co.nz and The Pacific Media Watch.

Tayyaba Khan is the founder of Khadija Leadership Network, the NZ Peace Ambassador for the European Muslim League, and a community development practitioner with over 15 years of experience having worked with migrant and refugee communities in the Occupied Territories of Palestine, Australia, United Kingdom and New Zealand. Since 9/11 Tayyaba has worked extensively with the Muslim community on a range of initiatives including raising awareness around the self-loathing syndrome perpetuated by media representation, politicians, and community leaders alike. Tayyaba is deeply passionate about working with minority and faith-based communities. Her particular interest with these demographics is posited in utilizing social justice, human rights, and ethical approaches to building a better and more peaceful world for everyone. Tayyaba is a regular panellist on The Panel, Radio NZ and The AM Show.